The University of Notre Dame and Saint Mary’s College, with grant support from Indiana Humanities, collaborated to host a Digital Humanities Research Institute in May 2019. Using the curriculum developed by The Graduate Center, CUNY, they provided 26 participants with the opportunity to gain foundational computing skills that allowed them to advance their own digital projects, assist others in the creation and maintenance of digital research, and/or instruct others in digital methodologies.

Daniel Johnson is subject specialist for English literature and digital humanities at the University of Notre Dame's Hesburgh Libraries System. He has graduate degrees in English from Wake Forest University (MA) and Princeton University (PhD), where he specialized in literature of the long eighteenth-century. 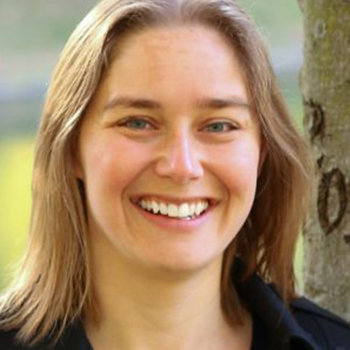 Sarah Noonan received her Ph.D. in medieval English literature from Washington University in St. Louis. As an Assistant Professor at Saint Mary’s College, she teaches courses in early British literature, book history, and the history of the English language. She is the author of essays on manuscript studies, medieval reading practices, devotional literature, and pedagogical practice. She is currently working on a project entitled “Peripheral Manuscripts” that seeks to assist non-R1, manuscript-holding institutions in digitizing their respective holdings and displaying them in a collective digital repository in order to increase that material’s visibility among the scholarly community.

Together with my collaborator Sarah Noonan, we put together what we're calling DHRI South Bend because it's a collaboration with two universities right across the street from one another, it takes place four days at least in our initial incarnation in which we fairly closely match what the original CUNY syllabus was which is sort of a stepladder approach to the core technologies in digital humanities.

I find first of all simply taking a course of instruction—even if it's something you've haven't experience in—always illuminates new areas of inquiry and then sort of thinking as you're learning relearning the technology on the meta level about how you teach the technology I think that helped us get deeper into some of the questions because we knew we're gonna have to turn around and think strategically: Why was it successful at CUNY; how is it going to be successful locally? And that sort of leads to the other aspect of the sort of personal development professional development is so helpful about CUNY model which was the networked approach to bringing people together. Instead of just simply giving you all the answers of how to learn these technologies, you learn them together with other professionals, sort of in this nebulous field of digital humanities, but that might be coming at it from different professional backgrounds: Librarians, scholars, scholars in different disciplines. So as much as it was about learning technology, I think learning how to work together in ways that are not always intuitive or always trained for humanities people was very helpful.

I think if you receive sometimes somewhat contradictory feedback that that's going to be a sign that you may be doing the right thing. One of one of the threads that we heard was: "this is going a little bit fast," and on the other side we heard "could we have a little bit more of this, I have some of these foundations, can we have more challenges?" I think one of the big challenges that we faced was pairing people, not only with the different disciplinary backgrounds that we've talked about but different experience levels. But I think that's also a sign of success because as you looked around at the tables, you saw people helping out one another, learning together, trying to figure out things as they went. So even though some people might have had the foundations, and knew already what they were doing a little bit, they were able to help those who otherwise might have started to get a little bit behind because you can't stop an entire class, the forward momentum necessarily because one or two people are having trouble, but if you're able to work together in community at your tables, you can keep going, catch back up, and leverage the strength of the community. I think those pacing questions were also matched up with responses that reseed, which said: Yes, I am certainly feeling supported and getting the help I need. The results on that were very clear and high. So if you get some of that contradictory result but also sort of that positive reaction to how things are going, how the help is going, I think that's a sign you're doing the right thing. That's sort of what we strove for.

My collaborator Sarah Noonan and I come from different-sized institutions. Her's is St. Mary's, it's a liberal arts college. Notre Dame is an R1, research-heavy sort of college but both are looking to emphasize interdisciplinary study—if I understand correctly—and DH is a great place for this kind of engagement and so we wanted to expose our participants to that diversity of participants, and where they're at whether they're students—we did have one undergraduate student—graduate students who are looking to start research projects but faculty members who might be looking to integrate DH more into teaching and pedagogy, which again, in turn, if your graduate student you might end up in a more teaching heavy-type of institution. So I think that that sort of diversity of background in multiple aspects was something that we wanted to expose people to, that's very compatible with DH. And then we started to think beyond the local to the regional context as we actually applied for grants. We received very generous funding from Indiana Humanities to support what we were doing. That got us thinking: there are a lot of places that could benefit from this type of program that don't have people dedicated to digital humanities, for example. Got us thinking a little more strategically about using the DHRI as a way to build up partnerships for these institutions, which again included everything from R1 down to liberal arts institutions. One common thread that we saw moving through there was: we want to start a digital humanities program of some kind or expand it. We don't really have much support for it locally. So we saw this as another opportunity to keep expanding networks beyond just the two campuses but to campuses throughout the region of varying sizes and emphases.

We've really tried not to reinvent the wheel on this in that we wanted to put into practice the things that we learned at the DHRI which built on one another. Here's command line, here's git and GitHub. Now you're gonna use that the next day to start building out the advanced sessions. So we took that ethos and said: OK, let's fork the curriculum, see what that looks like. Let's start to make edits. That actually got us thinking about what is a relationship of our forked curriculums to the original, which I don't think we've actually sorted out yet. But but we did want to use that forked curriculum as a basis for what we're doing because there's been a lot of work and a lot of experience that has gone into that. So we took that and turned the keys over to our graduate student teachers. We did have, I should say, one faculty teacher from St. Mary's, which was great. And let them put their own spin on the curriculum and we're gonna rethink a few things. This did expose interesting questions of: Oh, there's a personal story and an "I" voice in this particular module. What is my relationship to that? Do I need to change and adjust this? Or is this intrinsic to the curriculum? So we really did take what we think was a successful training program. As I hinted, it does sort of scaffold on itself and we wanted to preserve that scaffolding as much as possible. So we adhered pretty closely to the CUNY syllabus and we hope to develop some new modules based on that same ethos next year.